Name of book: “The Grapes of Wrath”
Names of group members: Brittany Geilear, Loren Williams, Kaylee Collins
Number of pages: 581
Chapters reviewed in this blog post: 7-14
Genre: Fiction
Author: John Steinbeck
Publisher & date published: April 14, 1939
Summary:
Joad is reunited with his family at Uncle Johns house. The family is getting ready to travel to California. The farmers aren't connected/don't care about their land, they just mow it with a tractor and go back inside. The Great Depression has effected farmers especially in Oklahoma and people are getting evicted by the bank because they have no money from their land because the dust bowl has not produced enough crops for the farmers to sell so they can get money. People are traveling to California because there are rumors that work is needed and they will get money to pay for supplies and feed their families.

Brittany: I think this book is a great way to show the hard times in our history. It definitely helps me understand some of the hardships we had and how everyone reacted to it. It showed that in desperate times people will do anything just for money, just for food. They would migrate by foot anywhere, just like the Joads. The Joads are out of options at this point so they turn to California, a place where there are rumors of a lot of job opportunities which equals money to spend on their survival. In this chapter the Joads are planning on traveling to California in hopes to find a job. 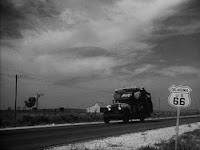 Kaylee: I think this book is a good example of how the Great Depression and the Dust bowl affected our country. The author does a very good job at describing their trials in a first person view that we couldn't otherwise experience. It shows that they had to make hard decisions in order to survive. For example, staying in Oklahoma wasn't an option so they were forced to move.
Loren: With the family needing support they decide to migrate to California which is the main push factor because there is nothing for them in Kansas. Although there are various risks with moving they pursue it anyways. On their route they encounter different people telling them there is nothing for them in California, this makes things worse because they simply don't have the resources to go back to nothing. Along their way they encounter many dangers with death and violence. Though this should make them want to leave they have no other choice.


Group Discussion:
This book portrays life in the Great Depression and the Dust bowl. Farmers are being effected because their crops aren't growing and from that they don't get enough money to support their family. So, they are being forced out of their houses, crops won't grow, and no work, these demonstrate our push factors. Farmers who have no where to go because they don't have work or money are migrating to California where they have heard rumors of opportunities for jobs.
Posted by Unknown at 2:47 PM